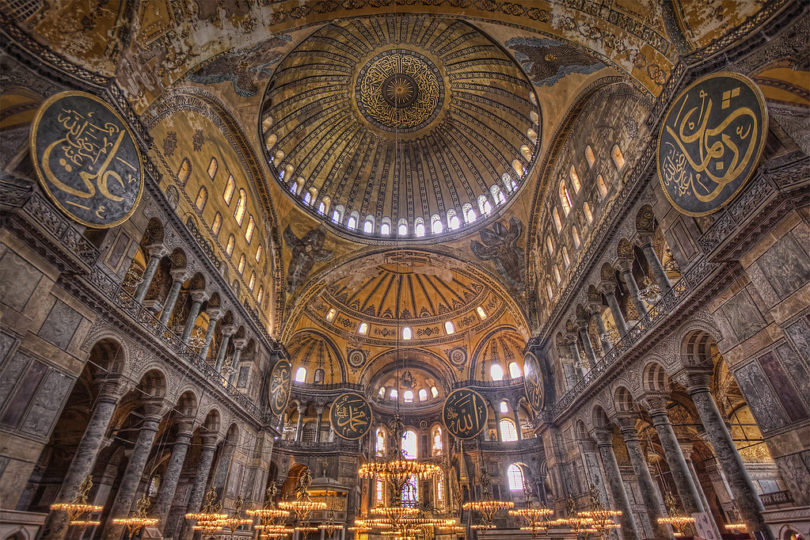 Whenever one imagines Turkey, it is difficult not to come up with the image of Hagia Sophia, as many people associate the country with this monument. It is one of the largest cathedrals in the world and is located in Istanbul. A visit to Turkey is incomplete without visiting this beauty.

Here are the top seven facts about the Hagia Sophia you probably didn’t know before.

Before the monument became Hagia Sophia, it was also called The Great Church because of the big size. The name Hagia Sophia came during 430 CE. It is Greek for Holy Wisdom, and this name remains till today, as it is now called Ayasofya Muzesi.

2. It Has Been Destroyed By Riots At Least Twice

In 404 CE, the Hagia Sophia burned in riots. After that, there were no riots in the church for a long time. However, in 532 CE, the Nika Revolt broke out, and Hagia Sophia was again a target of riots, which caused a lot of destruction to the structure.

3. It Is An Example Of Byzantine Architecture And Art

Byzantium had a long history and tradition of architecture, art, theology, and much more. These traditions merged many Eastern traditions along with Roman and Greek styles. From the stone inlays to the mosaics, marble doors, bronze doors, and much more are examples of Byzantine architecture and art.

4. It Became A Mosque For Five Centuries

Sultan Murad II first led the Ottoman Empire and then Mehmed II. The city was renamed Istanbul after being called Constantinople, and the church was looted. After that, Mehmed II called for a restoration of the Hagia Sophia and converted it into a mosque.

5. The Christian Mosaics Were Protected

Even though the church turned into a mosque, Mehmed II ordered the protection of the Christian mosaics. He whitewashed these designs in plasters and covered them with Islamic calligraphy and designs. Most of these designs and mosaics were uncovered, documented, and restored later on by Swiss-Italian architects.

6. It Was Turned Into A Museum

Yes, the Hagia Sophia has gone through many phases because of the different rulers of the country. Mustafa Kemal Ataturk secularized the cathedral and then converted it into a museum. Visitors from all over the world come to view this beauty.

7. You Will Find Many Islamic Features

While the Hagia Sophia had a more Christian history, Islamic features have been added to represent the country. That is because the space is also used as a mosque, which is why there is a prayer niche, pulpit, and much more. You will also find a school, library, kitchen, and more to this structure.

These are the top seven facts about the Hagia Sophia that you did not know before. We hope you enjoyed these tidbits and you will visit this beauty whenever you go to Turkey. It is something you don’t want to miss.