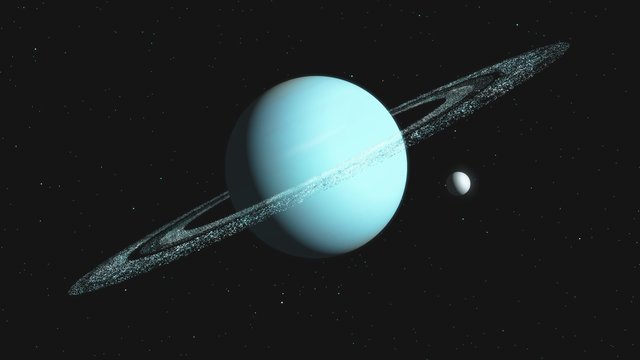 Uranus is a fascinating planetary system, a gaseous and ice behemoth. Uranus, the solar system's seventh planet, is the third planet in the world according to surface area and the fourth-largest planet in terms of mass, yet it is one of the least populated planets in the system. And it is the only planet in the universe with a title that comes from Greek mythology rather than Roman legends.

Fundamentals like these, however, are only the tip of the iceberg. From its multiple planets to its giant planets and the structure of its aquatic environment, Uranus is brimming with fascinating features. There seem to be ten fascinating facts about this gigantic iceberg of gas; at the very least, one of them will amaze you.

On the other hand, the heat just at the top of the atmosphere of Uranus, on the other hand (which would be described as the "average temperature" for giant planets), averages 76 K (-197.2 °C/-323 °F). However, it is possible to reach 47 K (-226 °C/-375 °F). It's because, unlike some of the other major giant planets, Uranus sends off less heat than it receives from the Sun. Whereas the interiors of all the other major solar systems are extremely hot and emit thermal light, Uranus' center has chilled towards the level where it no longer emits significant heat.

Uranus, on the other hand, has a startling 99-degree axis inclination! To put it another way, the globe is revolving sideways. As they orbit the Sun, all planetary systems resemble a rotating wheel, but Uranus is the only one that keeps things moving in a complete circle. This brings us to an even more odd truth regarding Uranus.