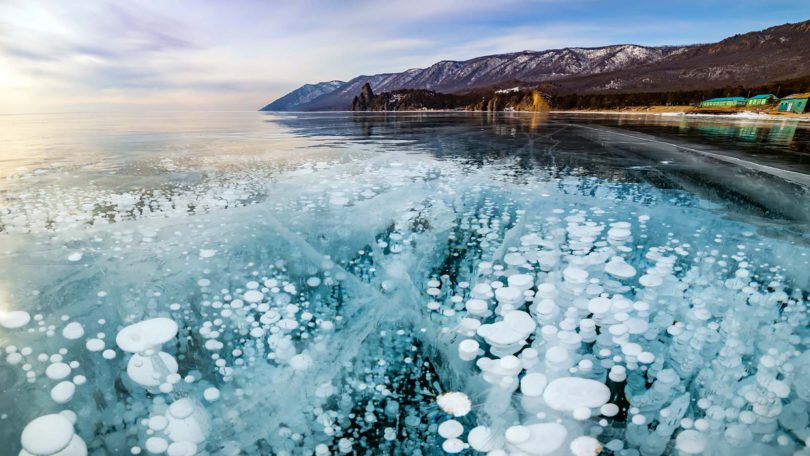 The world's largest and deepest lake is also one of the most stunningly beautiful. Lake Baikal, which is located in Russia and is Earth's deepest freshwater lake.

Let's talk about the numbers

Lake Baikal contains 5,521 cubic miles of water. This volume equals all five of North America's Great Lakes. And it holds more water than all of the Great Lakes combined. It's nearly as large as Lake Huron, Lake Michigan, and Lake Ontario combined. It also contains approximately 20% of the world's surface freshwater.

The surface area is 12,248 square miles, which makes this lake a tall drink of water. It's hard to imagine how long it would take to walk such a distance. By comparison, the state of North Dakota is about 600 miles wide. Lake Baikal is about seven times as wide as North Dakota.

The lake is a curious anomaly.

Where is Lake Baikal located?

Lake Baikal is in south-central Russia, not far from the Mongolian border. The lake is perched several thousand feet above sea level. It's a long way from any ocean, which makes it a fascinating anomaly.

Twenty-seven islands are scattered throughout the lake. Most of them are uninhabited, and some are pretty small. During the summer months, most of the islands are accessible by ferry. However, during the winter months, they can only be accessed by helicopters and small boats.

Lake Baikal is believed to be at least 25 million years old. It was created when the Angara River cut a valley through thin layers of soil, rock, and lava. Then, other geological forces caused the lake to fill. And over time, water from the lake has carved out a canyon.

3,700 species of wildlife are found at Lake Baikal

There are over 3,700 species of living organisms found at Lake Baikal. The number includes all types of plant life, fish, reptiles, amphibians, and mammals. Many species can only be found here, which is why some call Lake Baikal the Galapagos of Russia. These species have evolved in isolation because of Lake Baikal's inaccessibility.

Lake Baikal is home to more than 50 species of fish

The lake is home to a wide variety of fish. The lake contains many species which are endemic to the region. They have evolved in the complete absence of humans. Many of these fish are primeval. They're very slow-moving. And they're stunning.

There are even over 700 species of anthropods

It's hard to believe, but there are more than 700 species of anthropods. These are creatures that are related to insects. Many of these species are also endemic to the area, which explains why there are so many species of them here.

Lake Baikal is the world's most voluminous and deepest lake. This lake contains 20% of all of Earth's freshwater. It's very deep and very old. It is home to over 3,700 species of wildlife. These creatures have evolved or were isolated in the complete absence of humans. Some of these fish are ancient and very beautiful to look at.