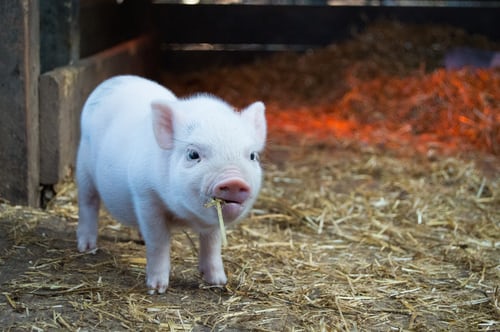 The two countries could not divide the small island of San Juan, and both declared their territory. Then, they forgot about its existence for 13 years. On one half of the island, the British Hudson's Bay Company established a sheep farm, and on the other half of the island settled Americans who grew potatoes. For a long time, they lived in peace, until one unfortunate incident occurred.

One day an American farmer named Lyman Catlar got up in the morning, went out into the street and found that a big black pig was ravaging his garden and eating potatoes. Since this was not the first time, Catlar freaked out, took a rifle and knocked down the pig on the spot without firing a warning shot.

Like a decent person, he went to the owner of the pig Irishman Charles Griffin, who ran a sheep farm, told about the incident and offered $10 in compensation. Griffin was very fond of the pig, he got angry and demanded at least $100. Catlar refused to pay because the pig invaded his territory.

Brigadier General William Harney, commander of the Oregon Military District, took the report that American citizens were being bullied. And he sent 66 soldiers of the 9th Infantry Regiment under the command of Captain George Pickett to protect the farmer. Seeing that a real military detachment arrived at the island, the British also decided not to waste time on trifles and requested support as three warships with marines.

Fortunately, after learning what the conflict was about, the commanders of the armies decided it was foolish to start a war over a pig. Therefore, both ordered their men to never shoot first.

For several days, American and British soldiers, seated in positions, shouted many offensive things to each other, trying to provoke the enemy into aggression to get the right to bypass the order and use weapons. But not a single shot was fired.

Upon knowing what had happened, top officials in Washington and London were horrified at the prospect of a war on such a trifling matter and began negotiations. But then the Civil War in the United States began inopportunely, and the negotiations dragged on for 12 years. All this time, American and British garrisons of a hundred men each held their half of San Juan Island. The British left the island only in 1872, the Americans withdrew their troops in 1874. The long-term Anglo-American confrontation on the island of San Juan ended in this way. Hopefully, the only victim of war was a pig.