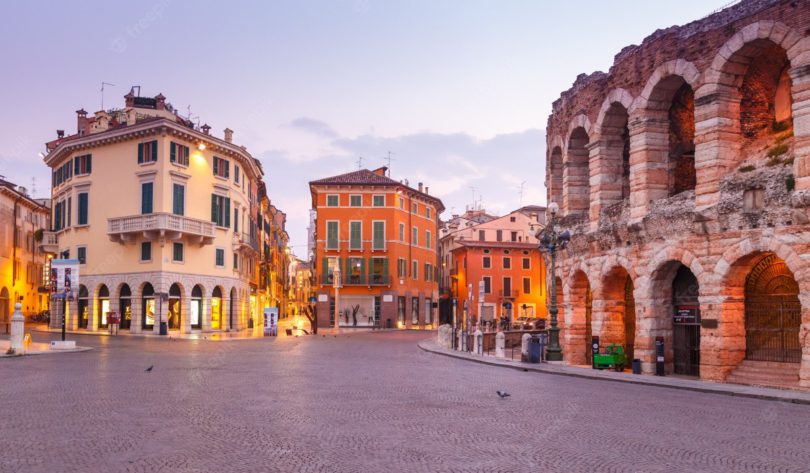 In northern Italy's Veneto region sits the city of Verona. It is surrounded by the Adige River on two sides and is located at the base of the Lessini Mountains. An ancient tribe (perhaps the Euganei or Raeti) built the city, which the Gallic Cenomani afterward inhabited. It was at the intersection of major roadways connecting Italy and northern Europe when it became a Roman colony in 89 BC and quickly gained prominence.

In the 13th and 14th centuries, the Scaliger family ruled the city, and from the 15th to the 18th centuries, it was a prosperous section of the Republic of Venice. Due to its rich cultural history, several yearly fairs, performances, and operas, including the lyrical season at the Verona Arena, Verona is now one of the most popular tourist destinations in northern Italy.

Verona's exact history is unknown, but one thing is certain: the city is incredibly old.

The city has been more than 2,000 years since the Romans captured it in 89 BCE. Verona still has ruins from this prehistoric era, including the Arena, a huge stadium.

Verona has been a part of the Lombard Kingdom since 569, when Alboin, the Lombard king, established it.

Charles the Great, better known as Charlemagne, the King of the Franks, seized control of the city in 774. After taking Verona, Charlemagne was crowned King of the Lombards. In 800, he was elevated to the position of Roman Emperor.

3. The city was first ruled by France, then by Austria, and ultimately by Italy.

And all of this just occurred recently! Napoleon's conquest of Verona in 1797 led to the city becoming French.

In 1798, he promptly lost the city to a populist rebellion and surrendered it to Austria.

In 1866, after the Austrians departed Verona, the city was ultimately handed over to the Italians, making it once more Italian.

4. It often fogs up throughout the city.

The greatest lake in Italy, Lake Garda, is not far from Verona.

All year long, an extremely humid environment is produced by the lake's closeness. In the winter, when humidity is at its highest, a layer of fog frequently forms over the city in the mornings.

5. Verona is the setting for Romeo and Juliet.

You may visit Juliet's home and the well-known balcony if you travel to Verona. There is a bronze statue of Juliet nearby as well. According to custom, touching the statue's right breast would promote pregnancy and love.

6. It is recognized by UNESCO as a World Heritage Site.

Verona's history is extensive, and it has long been a significant city. Despite their age—ranging from antiquity to the Middle Ages—many of the city's monuments are still in excellent condition.

It should be no surprise that Verona was designated a World Heritage Site by UNESCO as a city of great universal importance.

As a result, it is a must-see on every northern Italy road trip!

7. Third-largest Roman amphitheater in Italy is the Verona Arena.

The Arena, a Roman amphitheater constructed in 30 AD, is the most well-known structure in Verona.

It is comparable to the Colosseum in Rome, which has a seating capacity of 30,000 people and is the third biggest in Italy.

You should see the structure in Verona because it has been conserved exceptionally well.

8. During WWII, the city was severely destroyed.

Verona was a crucial city during World War II and a top target for Allied attacks.

The city suffered severe damage and was one of Italy's most frequently bombarded cities. Even worse, the Germans all demolished the gorgeous bridges when they evacuated the city in 1945.

It is remarkable to see how the city has been rebuilt since then.

Indeed, Verona places a lot of importance on football.

10. The provincial capital of Verona is called Verona.

One interesting fact about Verona is that it serves as the provincial capital of the same name. That is the same name, indeed.

It is a part of the Veneto region and, after Venice, is the second-largest city.

The Roman town, nestled in the river's loop and home to one of northern Italy's greatest collections of Roman ruins, makes up the city's central area. Verona is undoubtedly one of the most beautiful cities in Italy, serving as the setting for one of the most passionate love stories ever penned.